Citation: For his influential and groundbreaking contributions to the algorithmic foundations of satellite navigation, and for sustained dedication to the global education of the next generation of navigation engineers. 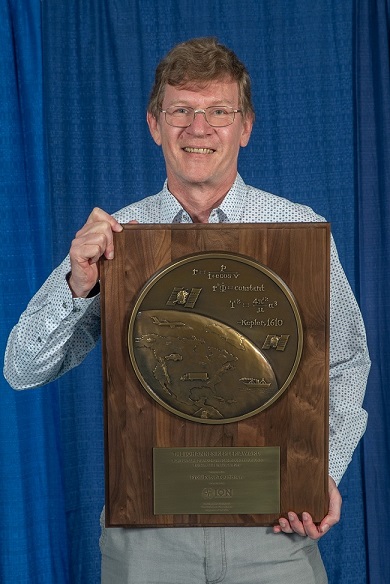 Among others, Prof. Teunissen laid the mathematical and algorithmic foundation of reliability theory, which enables a proper understanding of the quality of different integer ambiguity resolution methods and a rigorous characterization of their failure rates, which even led to the development of an optimal test for ambiguity validation. His findings are particularly important for multi-GNSS processing, which require a proper understanding of individual system characteristics and their respective contributions to achieve navigation solutions of the highest precision and integrity.

Prof. Teunissen has made contributions in the field of precise point positioning, the exploitation of triple-frequency observation, and the joint use of new GNSSs such as Galileo, BeiDou and QZSS. Pioneering work in this area include the early setup of multi-GNSS receiver test beds in the Asia-Pacific area; the discovery and proper handling of mixed-receiver inter-satellite-type biases, which were vital to fully exploit ambiguity resolution in the regional, BeiDou-2 system; and the first demonstrations of mixed GPS/Galileo/IRNSS/QZSS L5 processing for precise positioning applications.

Prof. Teunissen has made significant contributions to educating future generations. He is currently a Professor of Satellite Navigation at Delft University of Technology, The Netherlands and Curtin University, Australia. He received his PhD at Delft University of Technology in Mathematical and Physical Geodesy. He holds several honorary professorships and fellowships of numerous international organizations, including Australia’s prestigious Federation Fellowship of the Australian Research Council. He has published over 300 papers, seven books, is co-editor and author of the Handbook of Global Navigation Satellite Systems, and is a member of 13 editorial boards. He is a regular contributor to ION and ION programs. He is a Fellow of the ION, the RIN and the Royal Netherlands Academy of Sciences.

The Johannes Kepler Award recognizes and honors an individual for sustained and significant contributions to the development of satellite navigation. It is the highest honor bestowed by the ION’s Satellite Division.