Citation: For pioneering contributions to GPS for navigation of space vehicles, the advancement of multi-GNSS understanding and tracking networks to support scientific and societal benefit. 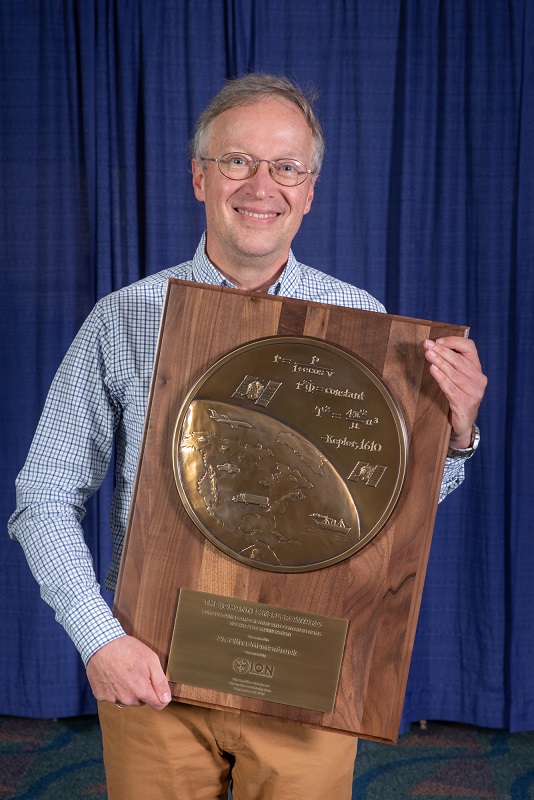 Dr. Oliver Montenbruck is head of the GNSS Technology and Navigation Group at DLR’s German Space Operations Center and an affiliated professor for GNSS at the Technical University of Munich. His research activities have been devoted to spaceborne GNSS applications, where he made outstanding contributions in the fields of receiver technology, autonomous navigation systems, spacecraft formation flying and precise orbit determination. These range from development of the first meter-level autonomous navigation system for micro-satellites based on Kalman-filtered GPS observations, to detailed modeling of user spacecraft antenna phase center variations, non-gravitational forces, and ambiguity fixing techniques that support GNSS-based POD precision to the 1 cm level in support of space geodesy.  His unique expertise in the field has resulted in numerous consultancy tasks for national and European space industry and agencies. Focusing on the new satellite navigation systems, he has pioneered the advancement of monitoring networks, characterization of new navigation signals, GNSS performance assessment, and multi-GNSS processing.

Within the International GNSS Service (IGS) Dr. Montenbruck chairs the Multi-GNSS Working Group and coordinates the performance of the Multi-GNSS Project (MGEX). He pioneered the expansion of global monitoring networks for new and modernized GNSS – initiating the Cooperative Network for GNSS Observation (CONGO), which has been a primary source of information for early assessment of Galileo, BeiDou, GPS L2C and L5 signals. His leadership and research have contributed to a thorough understanding of new GNSS constellations, enabled the full exploitation of new signals, advanced satellite technology and made multi-GNSS available to a wider community.

Dr. Montenbruck is an active member ION and past member of Council. He serves on the IGS’ Governing Board and key working groups. Dr. Montenbruck is widely recognized for his frequently-cited textbooks, ~100 publications in peer-reviewed journals, over 250 conference papers and the Springer Handbook of Global Navigation Satellite Systems, which he coedited and authored/co-authored. He is a recipient of the ION’s Tycho Brahe Award, the DLR Senior Scientist Award and the GPS World Leadership Award.

Dr. Montenbruck received his Ph.D. in 1991 and Habilitation in 2006 from the Technical University of Munich. He has supervised more than 25 master and a dozen Ph.D. theses, and served on defense committees at several international universities. As a visiting scientist, he conducted joint research projects at various international institutions, including the University of Texas at Austin, the European Space Agency, and the University of Bern.