Citation: For his significant and fundamental contributions to the practical, affordable and enhanced use of satellite based navigation for consumer applications, especially for mobile handheld devices; contributions to GNSS interoperability; and dedication as a navigation educator. 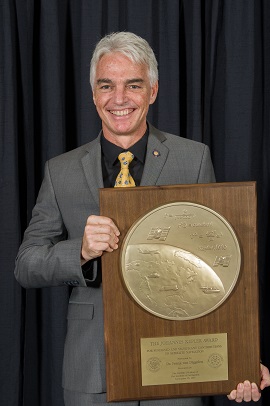 Dr. Frank van Diggelen is recognized as the inventor of the coarse-time assisted GPS technique and the worldwide reference network needed to replace the ephemerides provided by the time-consuming GPS navigation message. This allowed a GPS receiver to solve for its location under challenging conditions, and made GPS position fixing almost instant. He also developed receiver processing techniques that increased a receiver’s sensitivity, allowing GPS to work in weak-signal environments including in cell-phones in urban and indoor environments.

Dr. van Diggelen holds over 80 patents and has worked commercially for NAVSYS, Ashtech, Magellan, Global Locate and is currently Vice President of Technology for Broadcom. He has published extensively and is the author of the popular textbook A-GPS: Assisted GPS, GNSS and SBAS (Artech House 2009).

In addition to his commercial work he is an avid educator. He is a Consulting Professor at Stanford University and has been teaching graduate level courses for the past six years; and has lectured for numerous public and private organizations, including the ION Satellite Division’s African Outreach Program this past year in Rwanda. Most recently he collaborated on a massive open online course (MOOC) that was released last fall over Coursera to thousands of registered students.

Dr. van Diggelen started his career as a navigation officer in the South African Navy before going to college. He obtained his bachelor’s degree from the University of the Witwatersrand, South Africa and a PhD in electrical engineering from Cambridge University, England. He is currently serving as the ION Satellite Division’s Vice Chair.