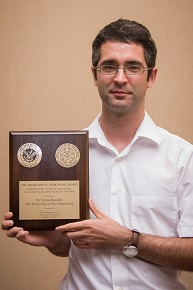 Dr. Simon Banville received his B.Sc. (2005) and M.Sc. (2007) degrees in geomatics from Laval University, Canada, where he first got involved with precise point positioning (PPP) using global navigation satellite systems (GNSS). In July 2014, he completed all Ph.D. degree requirements in the Department of Geodesy and Geomatics Engineering at the University of New Brunswick (UNB), Canada, under the supervision of Dr. Richard B. Langley. In the course of his Ph.D. degree, he published a total of 15 papers, including 8 in ION conference proceedings and 5 in peer-reviewed journals. During the summer of 2009, he participated in an internship program in Japan, sponsored by the Natural Sciences and Engineering Research Council of Canada (NSERC) and the Japan Aerospace Exploration Agency (JAXA), working with the Electronic Navigation Research Institute (ENRI) on the impact of the ionosphere on GNSS signals. In 2010, he received an ION GNSS Student Paper Award for a paper entitled "Antenna Rotation and its Effects on Kinematic Precise Point Positioning," co-authored with Hui Tang, another UNB Ph.D. candidate at the time of publication. Among other "firsts," Dr. Banville used GPS PPP to detect and measure the crustal shifts associated with the magnitude 8.8 2010 Chilean earthquake and used PPP to determine a receiver position using observations from the Galileo In-orbit Validation Element (GIOVE) test satellites and the first two Galileo In-orbit Validation (IOV) satellites. Since June 2010, Dr. Banville has been working for Natural Resources Canada (NRCan) as a senior geodetic engineer. His research interests focus on improving the convergence times of PPP solutions, and enabling undifferenced ambiguity resolution for multi-GNSS constellations.