Citation: For Graduate Student Excellence in Global Navigation Satellite Systems in his thesis "Forward and Inverse Modeling of GPS Multipath for Snow Monitoring". 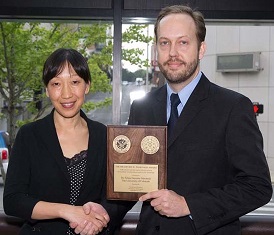 Dr. Felipe G. Nievinski received his B.E. degree in Geomatics from Universidade Federal do Rio Grande do Sul, one of the top federal universities in Brazil; a Master's in Geodesy from the University of New Brunswick in 2009 and his PhD in Aerospace Engineering Sciences from the University of Colorado in Spring 2013.

He is a member of the Institute of Navigation (ION), the Institute of Electrical and Electronics Engineers (IEEE), the American Geophysical Union (AGU), the International Association of Geodesy (IAG), and the Society for Industrial and Applied Mathematics (SIAM). As a graduate student, Dr. Nievinski has received many distinguished awards, including AGU’s Outstanding Student Paper from two different disciplinary sections (Cryosphere, 2011; Geodesy, 2010). He also won the ION’s Student Paper (2006), and the Brazilian Society for Remote Sensing Young Scientist Best Paper (2005). He was also the recipient of two fellowships, one from NASA’s Earth System Science program and the other from the U.S. Department of State Fulbright Program.

Under sponsorship from the Canadian International Development Agency, in 2006 Dr. Nievinski was assigned with the task of preparing and delivering a week-long course on geodesy concepts in Brazil. He returned in 2012 to lecture again for a week on GNSS at the Summer School in Geophysics. After nearly ten years living abroad, Dr. Nievinski has been granted a Young Talents Attraction award to relocate to his home country, sponsored by Brazil’s Science without Borders research internationalization programme. Today he is a Post-Doctoral Researcher in the Space Geodesy Studies Group (GEGE) at Universidade Estadual Paulista Júlio de Mesquita Filho (UNESP), São Paulo state. His current research focuses on the exploitation of GPS reflections for remote sensing of the environment, in collaboration with colleagues in Europe, North America, and Asia