Citation: For his contributions to GNSS signal modernization and to the compatibility and interoperability of global navigation satellite systems. 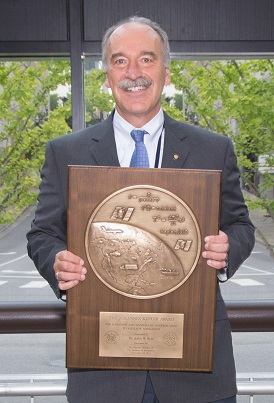 Dr. John Betz contributed to the international interoperability and compatibility efforts leading to the design of the GPS L1C civil signal. His Binary Offset Carrier (BOC) technique is used for the GPS M-code signal, and adopted by satellite navigation systems developed by Russia, Europe, China, Japan, and India.

Since 1997, Dr. Betz has worked on the Navstar GPS and also on international negotiations concerning compatibility and interoperability of GPS with the world's satellite navigation systems. For his role in the United States/European Union negotiations that established compatibility and interoperability between GPS and Galileo in 2004, he received the U.S. State Department's Superior Honor Award.

More recently, Dr. Betz provided critical analysis related to GPS modernization, recommending affordable enhancements to address increasing threats and to shape the architecture of military GPS for decades to come. Col. Bernard Gruber, Director of the GPS Directorate has said, "I can think of no one else in the past two decades, military or civilian, who has influenced this critical national asset to the same degree as Dr. Betz."

From 2004 through 2012, Dr. Betz was a member of the U.S. Air Force Scientific Advisory Board, including for three years when he led the 52 nationally recognized scientists and engineers providing technology advice to the Air Force's senior leadership. He is a Fellow of The MITRE Corporation and has been selected as a member of the National Space-Based Positioning, Navigation and Timing Advisory Board. He is an ION Fellow, an IEEE Fellow and a past recipient of the ION's Burka and Thurlow Awards.