Presented to: Dr. Richard B. Langley 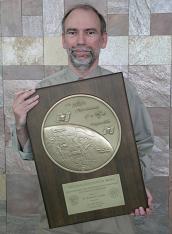 Dr. Richard B. Langley has been involved in GNSS for a number of years as well as teaching and conducting research at Canada's University of New Brunswick (UNB) since 1981. Langley's research team in UNB's Department of Geodesy and Geomatics Engineering has made many significant contributions to GPS positioning and navigation, including understanding atmospheric effects on satellite signal propagation. Virtually every GPS receiver sold today contains a code module based on UNB atmospheric research.

His research team is currently working on a number of GNSS-related projects, including its continuing study of atmospheric effects, space-based augmentation systems, error mitigation techniques, and the development of applications for space-borne GNSS.

Langley is also the principal investigator for a GPS-based instrument on Canada's future research satellite, CASSIOPE, determining the position and attitude of the satellite and measuring the density of electrons in the ionosphere-important for understanding space weather and its effects on systems such as power lines and satellites.

He has overseen the publication of more than 170 articles covering the full breadth of GPS theory and practice in his Innovation column in GPS World magazine. He has written many of the columns, especially the tutorials, himself. In addition to this, Langley was also a co-author of the first comprehensive textbook on GPS - the Guide to GPS Positioning published by Canadian GPS Associates.

Most significantly he has supervised numerous Masters and Ph.D. students, many of whom have gone on to their own distinguished careers in the general field of GPS and navigation.

Langley has a bachelor's degree in applied physics from the University of Waterloo and a Ph.D. in experimental space science from York University, Toronto. Langley has received numerous awards, including the ION's Burka Award, which recognizes outstanding achievement in the preparation of a technical paper contributing to the advancement of navigation and space guidance and NASA Group Achievement Awards. Langley is currently an elected Fellow of the International Association of Geodesy, the Royal Institute of Navigation (UK) and the Institute of Navigation (North America).