Citation: For his work in the design of six generations of GNSS receiver technologies, including advanced multipath reduction techniques used in major GNSS systems around the world today. 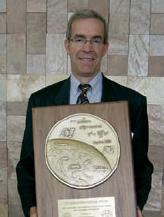 Patrick Fenton completed his bachelor's of science degree in surveying engineering at the University of Calgary in 1981. Shortly after, he joined Calgary-based Sheltech Canada Inc, a division of Shell Canada Resources Ltd. where he worked on the development of an airborne LIDAR mapping system. Fenton stayed with the company through its divestiture of Sheltech to Nortech Surveys (Canada) Inc. At Nortech, Fenton continued his development of LIDAR mapping systems that integrated inertial navigation systems and early prototype GPS receivers. In 1986, Fenton became the software development manager of Nortech's subsidiary, Norstar Instruments Ltd., which designed and built a geodetic quality GPS receiver.

After NovAtel Inc. acquired Norstar in 1989, Fenton moved with five other engineers to bring GNSS technology and business to NovAtel. At the time, NovAtel was primarily a cellular phone and base station manufacturer. At NovAtel, Fenton co-invented the Narrow Correlator™ technology and was chief architect of the MINOS1 GPS DSP technology and chip set. This technology was integrated into the GPS 1001 receiver that became the first C/A code receiver to provide DGPS sub-meter pseudorange positioning capability and was the recipient of the 1991 ION Better Mousetrap award.

Throughout the 1990s, NovAtel invested in high performance GPS technology and divested its mobile phone and cellular base station businesses. In 1992, Fenton was the lead designer of the MINOS2 GPS DPS chip set featuring12 parallel channels of C/A code ultra NC tracking capability, hardware sky search, and anti jam capabilities leading to the second generation of PC2 and OEM2 family of 12-channel receivers. In 1995, as director of research and development for the GPS business group, Fenton led the team that designed the MINOS3 GPS DPS chip set that features 24 parallel channels of C/A code and L2 semi-codeless tracking capability, an effort that resulted in the MiLLenium family of receivers.

In the late 1990s, Fenton was instrumental in the commercialization of the MEDLL™ multipath signal processing technique. This technology and the Narrow Correlator™ formed critical components of the WAAS ground network and are now found in all SBAS ground reference networks around the world today.

By 1997, Fenton was vice president of research and development. In 2002, he co-developed the PAC multipath technology that was commercialized in the MINOS4 GNSS DSP and can be found in the OEM4 family of GPS receivers.

After Fenton became vice president and chief technology officer of NovAtel, he was instrumental in the acquisition and commercialization of the Vision Correlator™ technology. This technology was integrated into the MINOS5 GNSS DSP chip set, and found in the Vision family of GPS receivers. In 2005, Fenton was appointed to NovAtel's board of directors.

Patrick Fenton is the author of numerous fundamental papers dealing with GNSS receiver technology and has been involved in 17 patents, including six pending patents.