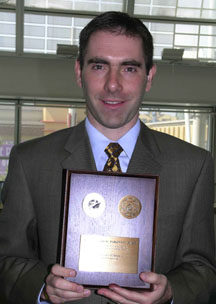 Alexander Mitelman was born in Moscow, Russia, and he immigrated to the United States with his family in 1977. After growing up in Nashville, Tennessee and Milwaukee, Wisconsin, Dr. Mitelman attended the Massachusetts Institute of Technology, where he received his S.B. in Electrical Engineering in 1993.

Each summer during college, he worked as an instructor of Russian at the Beloit College Center for Language Studies, an intensive language immersion program. Following the completion of his undergraduate studies, Dr. Mitelman received his M.S. in Electrical Engineering from Stanford University in 1995 with an emphasis on high-speed analog circuit design and micro-electromechanical systems (MEMS). In 1997, Dr. Mitelman joined the GPS/GNSS Laboratory at Stanford, focusing on signal quality monitoring, signal processing, and RF hardware design under the guidance of Prof. Per Enge. He earned his doctorate in Electrical Engineering as a member of the Local Area Augmentation System group in 2004.

Outside of his academic pursuits, Dr. Mitelman enjoys music, running, and cycling, and he is actively involved in the soccer community. He holds a United States Soccer Federation National Referee badge and is in the referee pool for Major League Soccer, the top-level professional league in the United States. He is also an avid photographer and has freelanced professionally for the past nine years.