Presented to: Thomas A. Stansell

Citation: For sustained and significant contributions to the development of Satellite Navigation. 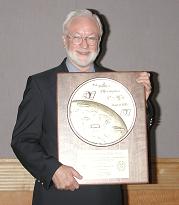 In the 1980's he lead the transition of Magnavox's commercial satellite navigation and positioning technologies and products from Transit to GPS. Among others this included the first truly portable GPS survey products, the first semi-codeless tracking of L2 and the first all digital GPS receiver architecture. He led Magnavox (and later Leica's) development of miniature GPS survey receivers, pioneered precise and real time GPS control of earthmoving machinery and received patents for multipath mitigation techniques.

He was a designer of satnav receivers and the first to deliver the first fully functional, multichannel GLONASS receivers available anywhere.

He has played a key role and contributed crucial ideas to the design of all new signals: L5, L2C and M-code. In this role, he was appointed by the JPO to lead a team to design the new civil signal on L2; an effort which eventually lead to him being recognized by the JPO with its 2002 GPS Navstar Award.

Tom has also served the Institute of Navigation as a past ION GPS Meeting Program and General Chair, is an ION fellow and has received numerous industry awards. Today he is still an influential GPS consultant advising the GPS Joint Program Office on modernization issues.